View as Grid List
Sort by
Display per page

Apple snails are easy animals that do well in a common aquarium or a pond.
They can live together with most fish species and they can be used to keep the aquarium clean of algae.
Not all apple snail species are a good choice for aquaria as their voracious appetite for aquatic vegetation is often not desired and the bigger species can cause problems with the water quality in smaller tanks.
د.إ.‏ 3.64

An Assassin Snail should be affixed to hard surfaces like aquarium glass or decorations.
An Assassin Snail has a cone shaped shell, similar to the shells of Malaysian Trumpet Snails and Rabbit Snails.
Assassin Snail shells are gold color with a dark brown stripe wrapping around it from aperture to apex.
It will take fish food like flakes, pellets and algae chips, as well as graze on algae and biofilm. It is believed, however, that an assassin snail's reproductive rate is slowed or halted unless its fare is protein-rich
د.إ.‏ 8.62 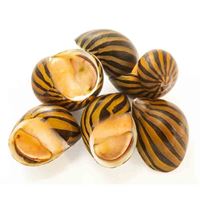 Zebra Nerite Snails are the most popular species of freshwater Nerite snail in the aquarium hobby.
They can be identified by their distinct black and gold stripes running from a point at it's shells tail.
Zebra Nerite Snails can grow to a sizeable 1" but are often bought and sold much smaller than this.
د.إ.‏ 8.36